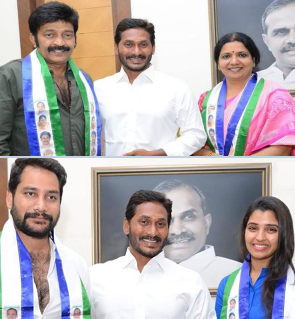 Jeevitha and Rajasekhar, Shyamla and Narasimha joined the YSR Congress Party in the presence of  Y.S. Jagan at Lotus Pond residence. Speaking to the media Jeevitha and Rajasekhar clarified that they have solved all the differences with YS Jagan. The couple expressed confidence in YS Jagan and assured him their support. They joined Congress party in 2008, after YSR’s death, they supported YS Jagan and even joined YSRCP. But later due to many difference they flew from YSRCP. In 2014 they joined BJP.

On the other hand, Shyamla and Narasimha’s political entry has become a hot topic in the TV industry. Shyamla is ready to participate in the campaigning programmes for YSRCP. Actress Hema also joins YSRCP.